Why you really should do the zipper merge freeway & highway traffic

When you approach a bottleneck in traffic — whether it’s due to construction or a permanent reduction in the number of lanes — what do you do?

Are you the driver who gets into the long line of cars in the lane that will stay open — or do you go along in the open lane as far as you can (getting in front of a lot of other people), and then merge just before the road barrier or closure?

Waiting to take your turn vs taking turns

If you’re like a lot of people, you do what seems the most polite: you get into line well ahead of the merge… and mutter under your breath as you watch those thoughtless other guys cut into the front of the line.

Here’s the thing: Those other guys? Whether they are acting out of selfishness or have a good understanding of automobile traffic dynamics, they’re actually doing the right thing.

Get to know the zipper theory

Several state transportation boards — along with the governments of several other countries — now recommend that both lanes of traffic stay full, then merge at the end. The key is that the cars in each lane need to alternate during the merge, much like how the teeth on a zipper come together. (This is also the same principle enforced by on-ramp traffic metering lights.)

Benefits of the zipper

Most drivers start to merge in construction zones as soon as they see warning signs and learn which lane ahead is closed, says the Minnesota Department of Transportation.

The MDT goes on to say that zipper merging benefits individual drivers as well as the public at large. Research shows that these dangers decrease when motorists use both lanes until reaching the defined merge area and then alternate in a “zipper” fashion into the open lane.

MORE
Safer ways to give acetaminophen to children

When to merge late, and when merge early

When to do the zipper merge: As you see the “lane closed ahead” sign and traffic backing up, stay in your current lane up to the point of merge. Then take turns with other drivers to safely and smoothly ease into the remaining lane.

Don’t worry about being “nice.” When traffic is heavy and slow, it is much safer for motorists to remain in their current lane until the point where traffic can orderly take turns merging.

When not to do the zipper merge: When traffic is moving at highway speeds and there are no backups, it makes sense to move sooner to the lane that will remain open through construction, and not worry about the zipper process. The MDT says that the bottom line is to merge when it is safe to do so. 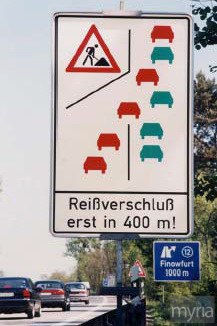 Germany, the Netherlands, and the United Kingdom use a zipper merge system in highway work zones. “When there is a lane closure, the vehicles are expected to take turns merging at the taper (lane closure) just like the teeth of a zipper, thus maintaining queue in both closed and open lane(s).”

The late lane merge system in Germany became law there in 2001. The country uses permanent road signs — an example shown at right — which display a picture showing the correct merging pattern to be used at the taper.

Germany’s merging method is supposed to take place directly before the bottleneck in order to prevent any unnecessary extension of the back-up.

“When a driving lane ends and there is at least one other open lane in the same direction, then the transition to the adjacent lane should be made possible by all vehicles arranging themselves directly before the beginning of the taper.”

Traffic merging into a single lane in an orderly and evenly-spaced fashion is sometimes described as a “zipper effect.”

MORE
What is phishing? The basics of these common phone & online scams

Bee happy: Taking the bite out of insect-sting allergies

Is raw cookie dough dangerous to eat? It didn’t used to be, but it is now