Growing up in a small town where I was a minority, my experience as a Gen Xer was one of duality.

Like so many other Black Americans in the 1980s and 1990s, I often found myself assimilating. This survival strategy seemed to be the only option if we wanted to be viewed as “normal” in my town.

But when you are a teen or young adult, you tend to measure normalcy based on what is presented in the media, and the way in which your peers transfer that information into daily living.

So we watched “The Breakfast Club,” “Sixteen Candles,” “Fast Times at Ridgemont High” — the list goes on — and we wanted to dress like Molly Ringwald, and behave like the members of The Brat Pack.

We noticed that our peers, who were not BIPOC (Black, Indigenous, and People of Color), would effortlessly mirror the physical characteristics of the actors up from our favorite movies — wearing makeup and hairstyles that matched the characters we’d all seen on the screen.

Many of “us” made an attempt to look like them — and it was often a fail. We did mimic the fashion, but it was a bit off, because — let’s face it — everybody knows that if your hair and make-up is off, so is the entire outfit!

The Black Gen X experience was not the same

We knew our experience as Gen Xers was different, and we were very aware that there was more to Gen X culture than what we were being exposed to.

We had family in other cities who didn’t know what the hell a “Spicoli” was, couldn’t sing one line of “Don’t You Forget About Me” — and God forbid we try to talk to our cousins about how funny Long Duk Dong was, because when we did try to share, the only response was the sound of crickets.

They would make fun of us, and call us “white girl” or “white boy.”

This was confusing, to say the least. I mean, after all, my skin color and hair texture begged to differ.

They didn’t realize that we didn’t really have any movies to watch that represented BIPOC. We didn’t have anything to help us better understand what being GXOC (Gen Xers of Color — yeah, I thought I’d get a little creative) looked like.

Based on my experience, there was no other way to fit in and enjoy the 80s and 90s — one had to BE what one’s peers and media defined as cool, trendy and normal.

When I was in high school, a young black screenwriter and producer decided he’d take a chance, and share some of the things going on within minority communities.

His name was Spike Lee. Yeah, you’ve heard of him! Good.

He brought us “School Daze ” in 1988, which introduced us to what college was like at an HBCU (Historically Black College or University).

This story brought to light the separation within cultural groups, and exposed how “Dual Gen Xers,” like myself, interacted with those who had one view, one lens, and one experience.

This movie encouraged people to think about the ways in which our experiences shaped our interactions — not only outside of our culture, but inside it as well. It prompted introspection and triggered change within each of us.

Speaking our language, but with a new perspective

Spike Lee’s 1986 movie, “She’s Gotta Have It,” introduced us to an independent woman who was able to choose who she wanted to date without conforming to societal norms.

She dated multiple men and wasn’t portrayed as being “loose” or “easy.” She was intelligent and successful.

This was huge in our community, because women of color — especially in that era — were expected to submit to machismo.

Utilizing his time and creativity to place an independent successful black woman as the main character spoke volumes about Spike Lee’s intention to utilize his platform to create balance in his storytelling, and to challenge the negative belief that women are not capable of making the choice to be independent and happy while single.

Do The Right Thing

Spike Lee premiered “Do The Right Thing” in 1989, sparking curiosity and conversations within the Black community inside our small town.

This led to the realization that something more — something significant — was happening with minorities outside our small town.

His story exposed segregation, racism, interracial dating, and how some people utilize conflict resolution. It shed light on how tension can ignite into violence, and led us to ask the question: What is the right thing?

Spike Lee created an awareness that was relatable to us in some ways — but not all ways, because, remember, we were “white,” too!

He also sparked our curiosity, and provided us with characters who looked like us, but who acted like our cousins who lived in bigger cities.

His 1994 movie, “Crooklyn,” told the story of the ups and downs of loss and love within an African American family, and how the family unit dealt collectively with hardships.

The story was completely familiar to us, even though it was representing a culture and values that were very different from the families we watched on television, like “The Waltons” and “The Brady Bunch.”

“Don’t You Forget About Me”

Spike Lee’s story presented us with a narrative that was often not present in the media or movies for BIPOC during that time.

With his 80s and 90s films, the visionary artist created a vehicle for Black people that helped us navigate the era with a reflection of our experiences that didn’t just include big hair, bright pink cheeks and rolled-up skinny jeans.

This is not to discount the experience of those who were not people of color — after all, I did enjoy that part of it, too.

Spike helped us with balancing our dual experiences, allowing the lens of assimilation to weaken, while adjusting the cultural lens to highlight the needs and experiences that were, and still are, unique to BIPOC Americans.

His movies opened a door that ignited our curiosity, and led us to seek out what we were missing as Black Gen Xers who had previously lived without representation of our wider culture.

Once we could see and contextualize the many different shades of our culture, and the heritage that united us, we would never forget — about who we were, or who we could be.

Just because we all lived through the 80s doesn’t mean our experiences were all the same. Case in point: Growing up in a small town this Black Gen X author’s experience, she says, was one of duality. One person who made a big difference was Spike Lee. Here’s why. 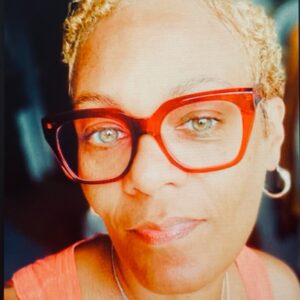 Nicole Adams-Fompun holds a master's degree (M.Ed) in Counselor Education and is a Licensed Professional Counselor. Nicole is also a Certified Rehabilitation Counselor, a life coach, freelance writer and author of "Your Thumbprint is Your Path." Nicole's motto is "Always be yourself, that's the one thing nobody can take from you."

Remember how to make a gingerbread house? Here’s a refresher course

Turns out the best exercise for brain health is dancing, so tell your parents to put on their red shoes & dance the blues!