Here’s a vintage in-person interview with Psychedelic Furs singer Richard Butler in San Francisco in May 1987. He spoke with Myria’s editor Nancy during the band’s Midnight to Midnight tour.

The article by the then-teen was originally published in her eighties music fanzine, Audivisse.

Nancy J Price: I’ve read that you don’t like writing songs about love, but you seem to use the word ‘heart’ a lot.

Richard Butler: I don’t mind writing songs about love — I don’t like writing love songs. There’s a big difference… most of the “Talk Talk Talk” album was about love, but they weren’t love songs, like “I love you, baby” — all that kind of shit. I can’t do those.

N: I’ve heard of plans for a solo album… 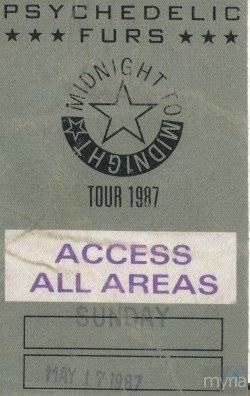 Richard Butler: At the moment, I’m just doing a lot of writing… whichever it happens to be for (Furs or solo]. I’d like to get enough to be able to do both.

N: How would the solo material be different from what you’re doing now?

N: Why do you think other bands sometimes consider the Furs an influence on their own music?

N: When bands come out with material that sounds a lot like the Psychedelic Furs, without really copying a song directly — do you feel as if they’re being unoriginal?

Richard Butler: I don’t think anybody starts out being original. I think you’re always the result of your influences. If someone was to start a band and they were influenced by Captain Beefheart and The Doors, people would go, “God, that’s incredibly original — what an original mind!” If someone came out and did the exact same thing with Duran Duran and Howard Jones, everybody would go, “That’s unoriginal — that’s crap.” But the person has only done the same thing, which is to mix up two influences.

I’m not saying that I like Duran Duran or Howard Jones, but that’s the process that goes on when you start a band. It’s not really about originality — you’re just taking all of your influences and all that you’ve taken in yourself, and putting it all together.

Gen X is trending on Twitter, and the strange response is peak Gen X