Before they were wasting time chasing cars, Snow Patrol sold over a million albums in the UK, opened for U2 on several dates of the Vertigo tour, and got their second album on the US charts. Find out more about Snow Patrol, a band from Northern Ireland (by way of Scotland), in this interview from 2004.

For the past five weeks, Snow Patrol — one of the UK’s best and brightest new bands — has been traveling across America on a bus that now shares certain traits with a warm m&m: shiny and colorful on the outside, dark and a bit gooey on the inside.

Every member of the band has been hit with one virus or another, and right now, their lead singer can’t manage to shake a bad cold — one that was, in fact, so debilitating that the group had to cancel a gig at a local record store earlier in the day.

They’re so sick and tired, it wouldn’t be hard to imagine that they would be ready to go home right about now. Back to Belfast or Glasgow or wherever you want to say they’re from, depending on whether you base that “from” on their city of origin (the former) or their present home addresses.

But instead of moping around and counting down the minutes ‘til the bell rings, these guys are loving every second of it. To be honest, anything America could throw at them at this point couldn’t compare to what the band’s been through already. So bring it on.

Going bananas on the dole

“We’ve sort of been in a band for seven years, but really unemployed for five,” laughs bassist Mark McClelland. “Our first record came out in ‘98, and then we had to wait three years for a second one, even though we had recorded it,” he says. “But we were on a small label [Jeepster] with Belle and Sebastian, and Belle and Sebastian were a hit, so they were throwing all their money into them. They said, ‘I know you’ve got this record ready, and I know you want to release it, but we’ve got to spend all our money on this and this and this.’“

All that “this” meant no album and no tour for Snow Patrol, at that point made up of McClelland, singer/guitarist Gary Lightbody and drummer Jonny Quinn. Undaunted, McClelland and their manager bought a van — one that was just big enough to hold the band and their gear. “And that meant we could afford to go ‘round for nothing. And we just did it. We just did it because we believed in it. We wanted to believe in it.”

Alas, there was little but that faith to motivate them. “Three years went by, and if you don’t release any records, you don’t complete any contracts — you’re totally unemployed, there’s no income whatsoever,” he sighs. “So for three years between that album [2001’s When It’s All Over We Still Have to Clear Up] and this album [2004’s Final Straw], we were just sitting there, going slowly nuts.”

Going nuts — and living together in a flat in Glasgow, a situation that McClelland says actually worked for a while. “But when everyone’s eating beans, and you’re fightin’ for the last can, it sort of gets a bit much.” 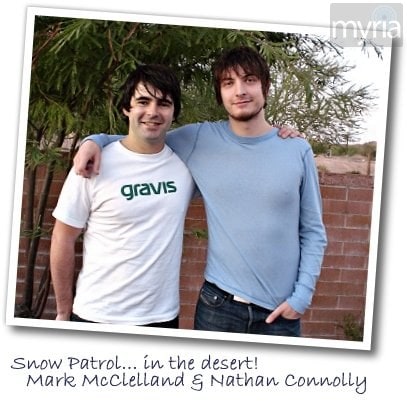 Ultimately, the band left Jeepster “because we weren’t happy with that sort of treatment,” says McClelland. Becoming free agents, however, didn’t make an immediate difference. “There was another dry spell before we got this record deal — another two years.”

Although it took longer than they could have ever imagined, that deal, with Polydor’s Fiction label (Interscope/A&M stateside), was worth the wait. Finally, Snow Patrol were in the major leagues.

There are about 30,000 new recordings released each year just in the United States, according to the Recording Industry Association of America (RIAA). Of those, fewer than ten percent are actually profitable. Considering that an album with major distribution costs a label upwards of a million bucks, record companies typically remain interested only in what sticks.

McClelland knows the odds were against them. “We could have just disappeared — many bands do,” he says, shaking his head. “We were just incredibly lucky.”

MORE
The power of representation: How Spike Lee's revolutionary storytelling changed the game for Black Gen X in the 1980s

Luck played a part, true. But no more so than talent, faith, persistence, timing… and a whole lot of patience. And when all that finally paid off, it paid off big.

Final Straw, Snow Patrol’s third album (though their first released stateside) hit number 1 on Billboard’s Heatseekers chart in mid-October. Just over six months after its release, the album had already sold 158,000 copies in the US. And nine months after the February 2004 release of the UK version, it had shipped more than 900,000 copies, certifying the British disc triple platinum.

The band capped the year by appearing on the Band Aid 20 re-recording of “Do They Know It’s Christmas” — a single that also includes Bono, Paul McCartney and members of Radiohead, Coldplay, Keane, The Darkness, Travis, Blur and The Thrills.

“It’s just taken us by surprise,” says McClelland of the band’s hard-won hit status. “By this time last year, we’d already had a more successful album than either of the first two, and we were happy with that… We’d sold 20,000 records in the UK — ‘Woo hoo, this is great!’ And then suddenly with this record — bang,” he says, eyes wide. “Just been trying to get our heads around it ever since.”

Compared to the band’s earlier work, Final Straw has a different feel — clearly more modern, and, well, more obviously marketable. Not only was the band coming from a whole different place because the famine was finally coming to an end, it was also the first time the band had an actual producer at the helm. Of the earlier self-produced albums, McClelland acknowledges, “I think our indie ethos held us back a wee bit.”

With acclaimed producer Garret Lee, otherwise known as “Jacknife Lee,” on their team, things would undoubtedly be different. Lee’s client roster included the likes of Eminem, Christina Aguilera and Run DMC. While he didn’t try to turn Snow Patrol into Belfast’s hottest hip-hop band, that’s not to say he didn’t make a few tweaks here and there.

MORE
Judy Blume movie: The ultimate Gen X puberty handbook, 'Are You There God? It's me, Margaret' coming to theaters in 2022!

“We changed ‘Wow’ just as we started recording it,” McClelland says of the album’s second track. “Nathan [Connolly, guitarist] was messing about and [the producer] said, ‘Well okay, tape rolling,’ and we started — and then he went, ‘What was that Nathan was playing? That was much better,’ so we had to change the whole song.”

Indeed, Connolly’s involvement was another major element shaping the band’s new sound. “Nathan’s the new boy in the band,” says McClelland. “He joined just for this album.” Formerly employed in the stockroom of record store chain HMV, the new guitarist was the final piece of the puzzle. (Lest you think he just lucked out big time… well, he did — but he was also only 13 when McClelland and Lightbody first started the band.)

“At the time when I joined, they had just gotten together with Big Life [management]. Basically, in the space of a day, I ended up in Glasgow,” says Connolly. “I’d say pretty much half the record was already there when I joined, and the other half, we’d just started writing. There were parts that were there, and we changed songs and different things.”

By way of example, McClelland offers, “Nathan did the hook to ‘Spitting Games.’“ Of his contribution to this song, arguably the album’s catchiest single, Connolly shrugs. “Sometimes just someone’s messing about with a couple of chords, you start playing along, and it just fits it automatically — you don’t even know what you’ve done,” he says. “It can be so accidental.”

>> Read more on the next page!